It may be the darkest time of year, but we can light the lights, and share good cheer!

Many Thanks to all who have visited this year ~

And let us all hope for Silver Linings

Childhood favourites and Christmas Classics are often inextricably linked in readers’ memories, and sometimes have more in common than we realise – and sometimes there are many more stories to discover behind them…this is the story of John Masefield and Joan Aiken.

“The Wolves are running…” is the mysterious message the boy Kay Harker is given by the old Punch and Judy man in Masefield’s The Box of Delights; it was a potent image from Joan Aiken’s childhood reading, complete with snow… re-reading the book became one of the Christmas traditions that remained with her until she was able ‘to write the wolves out of her  subconscious’ and into her own story many years later.

The poet John Masefield with his wandering, seafaring life had been a powerful influence on Joan’s father, the poet Conrad Aiken, who started writing himself from the early 1900’s; the first Masefield novel Joan came across was lent to her in the 1920’s by an old sailor in the village where she lived.  As a small girl she was utterly gripped by this mysterious and terrifying tale, The Bird of Dawning, but Masefield’s books for children – The Midnight Folk and The Box of Delights – didn’t appear until some  years later, and she first discovered them in 1936 in her school library.

In a piece for the John Masefield Society about her love of his books Joan wrote:

So although readers may associate these two ‘Wolves’ books, John Masefield’s and Joan Aiken’s, with their stories of heart-stopping chases across snowy wooded landscapes, it was the first of his Kay Harker books, The Midnight Folk, that was to have the most lasting influence on Joan Aiken.  And rather than her ‘Wolves’ title, it is another story of Joan’s that owes most to John Masefield – the one she made up at age 17, at the height of the Second World war, to comfort and distract her small brother. Aiken’s real first novel,  which was actually published two years before The Wolves of Willoughby Chase, was called The Kingdom and The Cave. It was a pure, pleasurable homage to the Masefield books she and her brother knew and loved, and Joan Aiken, fully recognising her debt, never imagined that one day it would actually be published.

But years later, at a time when when she desperately needed to support a sick husband and two small children, she took out the old exercise book where she had written it down, typed it out and found a publisher who agreed to take it after a complete revision and some very substantial cuts, which finally made the story  her own. As she said later:

‘All young writers learn by imitation…and certainly I could not have chosen a better model.’

It seemed absolutely fitting that Virago Modern Classics should agree to republish this book,  Joan Aiken’s real first novel – written many years before The Wolves of Willoughby Chase – and that it should get one of its best reviews from a young reader who found as much delight in her story as she and her young brother had found in Masefield’s, so many years before.

The ongoing influence of great writing on young readers, and future writers is discussed in a review by Piers Torday who adapted The Box of Delights for a Christmas production at Wilton’s Music Hall. He describes the influence that John Masefield has had on many other writers for children, including Susan Cooper and C.S.Lewis; and we can all share their enthusiasm for Masefield’s wild imagination and skill in crafting an enduring fantasy, and their wish to create books like the ones that so delighted them as children.

Here is Joan Aiken’s own tribute to the master: 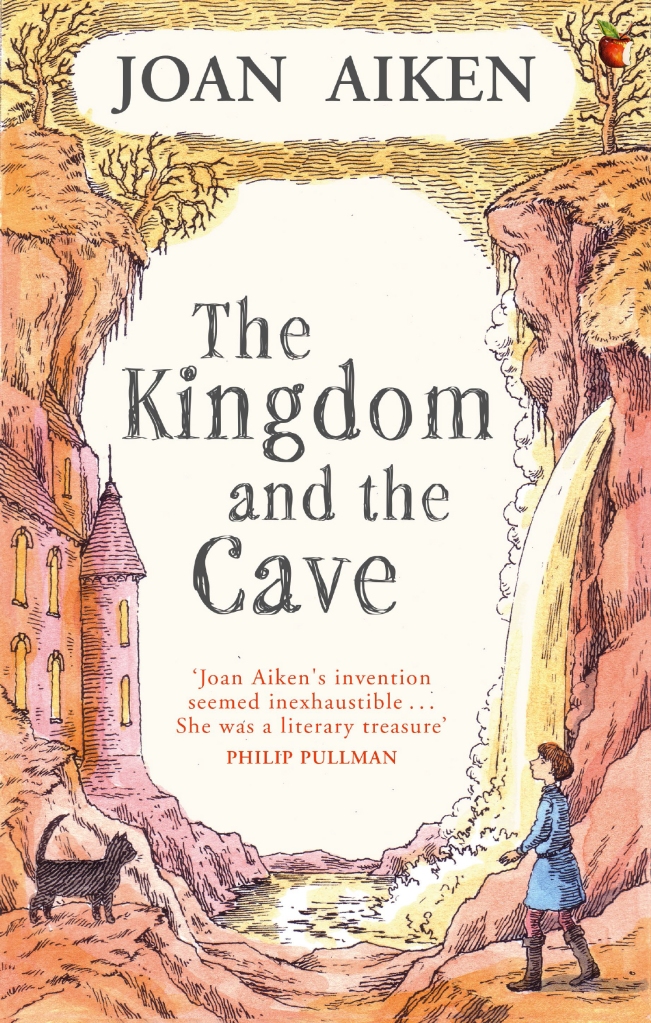 and you can read more about it here

The Journal of the John Masefield Society

“It was dusk, winter dusk – snow lay white and shining over the pleated hills…”  Does this sound familiar? The opening lines of The Wolves of Willoughby Chase could almost describe a scene from Joan Aiken’s first adult novel, The Silence of Herondale,  published just two years after her famous children’s classic.  This novel, also set in a snowy landscape, draws on her Gothic imagination and ability to conjure scenes of suspense and sinister villains, with thrilling chases across wild snowy moors; but this time the story is written for grown ups, so will there be a happy ending?

In the pre-feminist 1960’s women’s struggle for independence had barely started, but in Joan Aiken’s novels, her courageous and free thinking heroines were based on earlier models from her reading of Jane Austen or the Brontes, or indeed on her own experience of being left a young widow with two children, and an urgent need to earn a living for herself and her family.  In one of Joan Aiken’s favourites,  Northanger Abbey,  Jane Austen had written a parody of the Gothic Novels she was reading in her day, such as Mrs. Radcliffe’s best-seller, The Mysteries of Udolpho, where hapless heroines found themselves in haunted castles threatened by unknown horrors.

Jane Austen’s juvenile skit, Love and Freindship, written in 1790 when she was fourteen, also poked fun at the Gothic school whose heroines, like Emily in Udolpho, faint at every emergency, both major and minor.  Sophia, one of the heroines of Love & Freindship, when dying, advises her friend Laura: “Run mad as often as you chuse; but do not faint.”  Over-indulgence in fainting  brought on pneumonia, which finished her off!

Aiken writing her 1960’s Gothic Romance was just as tongue in cheek! Her poor heroine, having arrived by night at a remote farmhouse on the Yorkshire moors, has to start up the generator to get the lights on (no shrinking violet she!) but the scene is written almost as a comedy, with a hysterical guard dog throttling himself at the end of his chain while our heroine wrestles with the machinery. Nevertheless all the trappings of romance are there – the heroine, Deborah has mysteriously lost all her possessions in a burglary, her family have all disappeared, the employer who takes her on as a governess to a young prodigy, almost immediately establishes a mysterious hold over her with veiled threats and blackmail, and at first sight it is impossible to tell whether the hero is the villain, or vice versa…

A trademark of Aiken’s writing, familiar to all who have been brought up on her books for children, is that she never writes down to her audience; her language is rich and often riotous, her settings exotic and extraordinary, and her plots absolutely bursting with action and excitement, so that her children’s books appeal just as much to adults, who seem to re-read them with pleasure throughout their lives. So what is the difference in her writing for adults – not a great deal perhaps?  In The Way to Write for Children – a guide commissioned by the Arvon Writers’ Foundation – she says:

“Children have tough moral fibre. They can surmount sadness and misfortune in fiction especially if it is on a grand heroic scale…it may help inoculate them against the real thing.  But let it not be total tragedy, your ending must show some hope for the future.”

So, in her writing for adults, is the chief difference that the book need not end happily?

You will have to read on and see…

” After a long life reading thrillers…I tend to turn impatiently to the end. Not so in the case of The Silence of Herondale – rather than wanting to rush ahead and discover the ending…I wanted to spin out to the last possible moment the pleasure of that discovery.”

The Murder Room at Orion are re-issuing six early thrillers  by Joan Aiken. 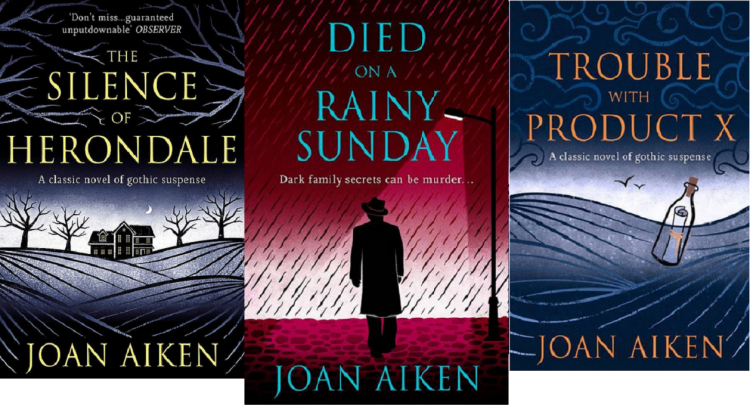 All EBook Titles will be available with this dramatic new look

The Silence of Herondale is reissued in Paperback January 2020

Read more about all her Adult novels here.

Joan Aiken believed that encouraging the development of imagination in our children would be the key to the survival of the human race, and the surest way to create hope for the future; perhaps this is the reason why we must now rely on our young people to lead the way for us on climate action.

“How can we cultivate this faculty in our children?”  she wrote, and went on to imagine that perhaps in every school there could be special classes which would:

“Teach children to use their own wits, to amuse themselves, to keep themselves hopeful, to solve apparently insoluble problems, to try and get inside other people’s personalities, to envisage other periods of time, other places, other states of being…”

…and of course her own way of passing on these ideas would eventually be by writing and sharing her stories, but this was something she realised that she too had to learn. Taught at home in an isolated village until the age of twelve, she found relating to the world of other people extremely difficult and threatening when she first arrived at a small boarding school:

“Training the imagination takes time and energy. Most adults keep their imagination at low level voltage a lot of the time – we have to; otherwise life would be too grim.  We are so bombarded with news from outside; unlike our ancestors who knew only what was happening in their own villages or cities, we know, all the time, what is happening in the whole world. Nevertheless we need to help children retain their early curiosity, their urge to explore.”

The picture of the small girl above, proudly displaying her own statement amongst hundreds of others expressing themselves in a sea of placards during a recent demonstration, seemed to be a perfect expression of the kind of encouragement we can and must show our children; she is being encouraged to express her own self and allowed to be proud of it.

In Joan Aiken’s writing on imagination, and ways of teaching our children to be hopeful and positive in their contribution to the challenges of life, she concluded that patience, and indeed our own hope for the future are very much a part of the process: 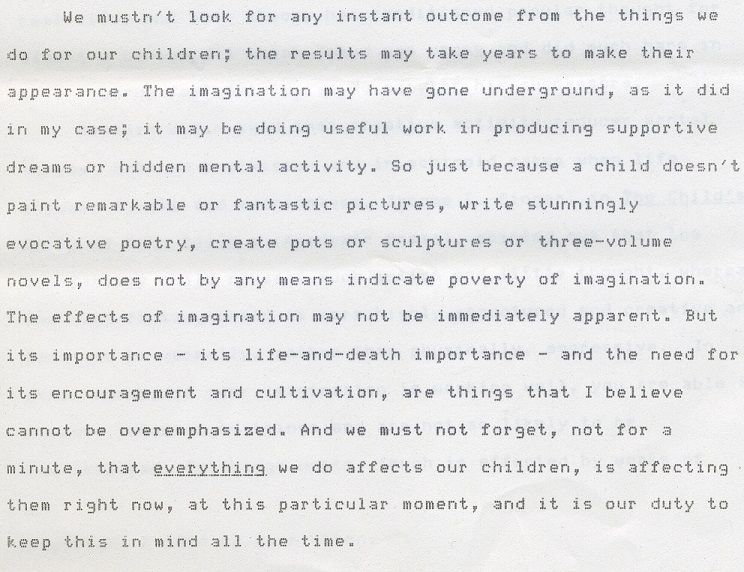 The Way to Write for Children