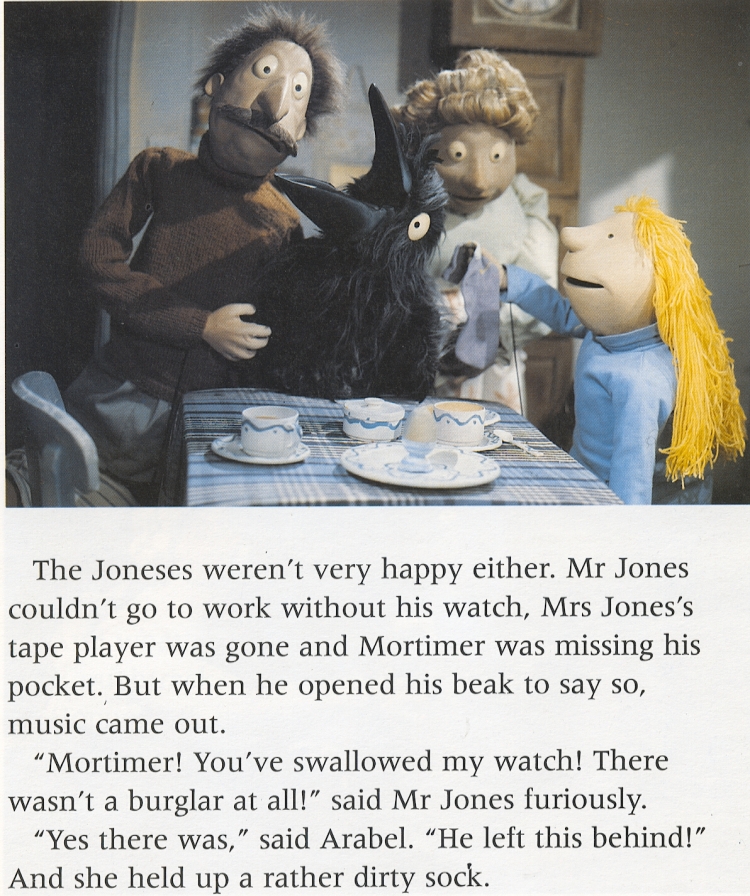 A typical day for the Jones Family – mayhem with Mortimer, or occasionally miracles; although Joan Aiken described him as the personification of a wonderfully childish ID to the sensible Arabel’s Ego, his wilful mischief which severely tried their patience was just as likely to turn up lost treasure and bring delight to his weary but ever-loving family!

As a couple of Mortimer fans have observed, ravens have a long and significant history in legends and literature, there is much fascinating material to be found about them, whether as ‘tricksters’ or all knowing clowns, or prophets of doom; Joan Aiken would have been familiar with many of these myths and stories. She was also an early reader of Edgar Allan Poe, and even won a china bust of the writer as an award for one of her own mysteries – and Poe is obviously responsible for Mortimer’s one and only utterance of ‘Nevermore!’ taken from his poem The Raven.

In fact Joan Aiken’s raven is as much a parody of Poe’s aggravating night time visitor, as he is a figment of Aiken’s own imagination; but he also owes a good deal of his insouciant character and the wicked twinkle of his eye to his artist creator, Quentin Blake who drew the characters of the Jones family and their ‘great awful bird’ for the first Jackanory stories where he appeared.

In this one, ‘Mortimer’s Portrait on Glass’ which has luckily been preserved, he is also given voice (as, charmingly is Arabel too) by the great Bernard Cribbins in a fantastic tale of a typical Jones family holiday which includes the gleeful destruction of a glass factory and the discovery of a dinosaur…

Joan Aiken had an enormous amount of fun incorporating the worst disasters that could occur in or out of the family home in a way that is deeply cathartic to the parents of small children, and which all can enjoy sharing at any reading aloud session.

Thanks are also due to the amazing puppet team led by Francis Wright,  with designs by Malcolm James for the BBC who brought several series of the stories to life on CBBC, and built wonderful sets that even took Mortimer back to his ancestral home at The Tower of London.

These delightful puppet films are now available to download here, although sadly the BBC store itself will be closing down soon. (Or even more fun – in Spanish here! )

So if you are out Trick or Treating over the Hallowe’en season, one door you should perhaps not knock at is that of the Jones Family in Rainwater Crescent, London NW3 and a half…like the burglar from that story above coming back for his sock…?

You are likely to get more of a trick than you bargained for!

Other recommended reading for Mortimer fans:

a lovely blog on Three Sets of Ravens  by Nick Swarbrick,

and  posts from the always erudite Calmgrove