All of Joan Aiken’s historical novels, whether Regency Romp, Gothic Melodrama or Austen Entertainments (or sometimes a mixture of all three!) are now being republished as EBooks and new paperbacks, so if your well thumbed copies are falling apart, or you want to re-find a long lost favourite or discover a whole new world of  ‘Joan Aiken for Grown-ups’ – now is the moment to stock up your collection!

The three novels above known as the Paget Family Trilogy are all partly set in Joan Aiken’s own home, the (unsurprisingly!) haunted Hermitage, in Petworth Sussex where she spent the last years of her life. But the Paget women are great travellers; the first novel is set at the time of the French revolution in the 1790’s, with a hazardous escape – by balloon! and the last is set partly in Brussels and the salons of Paris in about 1860. The second covers a fantastic journey from northern India all the way back to England; all make use of historical events and characters of the time – back in the small Sussex town we meet the 3rd Earl of Egremont, owner of Petworth House, and of course the Prince Regent on a visit from his Pavilion in Brighton…

Between them, this loosely related series, and Joan Aiken’s other period novels, draw on the innovative literary and historical style of the late eighteenth century and the early nineteenth, when Mrs Radcliffe was inventing the Gothic Romance with The Mysteries of Udolpho, and Jane Austen, who read her predecessor avidly, produced her own Gothic parody with Northanger Abbey, and proceeded to create a new style of ‘romantic’ novel that has been a model for female authors ever since. In her styles and settings, Joan Aiken goes on to encompass the rest of the nineteenth century –  an extremely fertile period for the development of the novel – that takes us through the Brontes and Dickens, from completely Gothic to more urban settings, and then on to the sensational novels like Wilkie Collins’ Woman in White, right up to the ghostly tales and grand  international romances of Henry James.

It is hard to pin down Joan Aiken’s style, she revels in Gothic Romance, with romance in the sense of finding beauty and adventure even in the everyday, and Gothic in her use of mystery and suspense and fantastic settings, but also with a keen eye for period style and historical detail, and always with a strong and sometimes humorous or parodic critique of the role of the heroine, in the novel and in society. Add to that an understanding of literary tradition, and usually a well-read heroine, who is sometimes a writer herself, and some pacey dialogue, eccentric characters, and a thoroughly modern interpretation of relationships (and sometimes a touch of terror!) and you begin to get the picture… 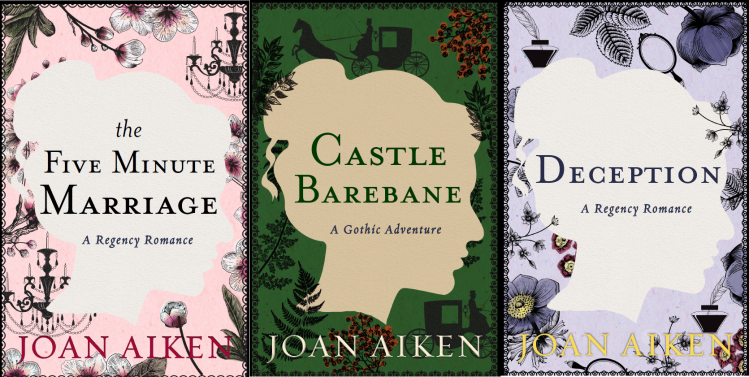 ‘Regency’ has also become a pretty wide ranging category, more or less invented by the prolific Georgette Heyer, who also took Jane Austen as an early model, but which has come to mean a comedy of manners in a period setting rather than a full on Romance. These next three novels go from the very Heyerish Five Minute Marriage  (with elements of Dickensian London) to full on Gothic Horror in the style of Mrs Radcliffe or Sir Walter Scott with her Castle Barebane, and finally Deception – dedicated to all female writers – is a moving family saga and high drama set in a remote Northumbrian mansion.

Joan Aiken’s ‘Austen Entertainments’ as she called them take up the stories of some of Austen’s lesser characters or younger sisters –  one of the four Ward sisters from Mansfield Park for instance, The Youngest Miss Ward – to give them their own stories – in this case a reversal of Austen’s plot – rich girl goes to live with poor relations! In another she completes The Watsons one of Austen’s own unfinished fragments with Emma Watson.

These two are now out as handsome new paperbacks. Jane Austen was Aiken’s most admired literary predecessor, and though the adventures of the Aiken heroines may be a trifle wilder, as she allows them an independence that Austen could not, there is nothing in these imaginative sequels that a young Jane Austen – author of some fairly tongue-in-cheek parodies herself in her younger years – might not enjoy!

It is delightful to see all these novels becoming available again, a hugely important part of  Joan Aiken’s literary career, whether for old Aiken aficionados, or new readers moving on from the Willoughby Chase series or her other children’s works, who never dreamed that these gripping and eminently readable titles even existed. Find out much more about all of them on the Joan Aiken website – and welcome to the Aiken ABC! New to Joan Aiken? Here’s an idea of what NOT to expect…!

3 thoughts on “A Joan Aiken ABC – An Aiken Book Bonanza for Completists!”