“Heard melodies are sweet,” Keats wrote, “but those unheard are sweeter,” and for Joan Aiken they often provided the inspiration for stories full of  music which the reader can hear only in his imagination. She created some wonderful imaginary music, like a tune which when whistled or sung brings a cardboard cut-out garden to life, or a record which turns itself over while sending the listener into a story world of her own, or a kingdom so dedicated to music that when the people forget to honour their goddess, they are stricken with a burning, freezing curse until she can be summoned back by notes from a harp that comes from deep water, ‘a harp that no man has ever played.’  Music is seen as a powerful and magical force.

Brought up in a household with only a piano to provide music before anyone in her family had a record player or even a radio, as there was no electricity in their village, she became musically literate enough to make use of ‘heard melodies’ that stirred her imagination too.

One of her earliest stories, The Mysterious Barricades, takes the same title as a piece of French harpsichord music, and produces a fantasy set in a Transylvanian territory that might have come from  Mary Shelley, except that it is also a wry comment on the kind of Government Department where she worked in the 1940’s helping to keep the wheels of Britain turning during World War Two.

The gloom of this deadening bureaucracy could only be lightened by a flight of fantastic imagination.  In Joan Aiken’s story of their musical quest to escape from it all, two civil servants and a canary finally arrive together on a mountain top and play a piece of music ‘of more than mortal beauty’ which causes those Mysterious Barricades to open and let them through.

Music was a great support to her – going to concerts and singing in London churches provided solace in those dark days, but she wasn’t afraid to parody the over seriousness of the musical establishment of the time either. In the 1950’s Joan Aiken worked at the short story magazine Argosy first editing then writing or finding  copy to fill odd corners and producing a monthly ‘log book’ full of imaginary news items.

One of these purported to be a memorandum from one of the tiresomely bureaucratic  Government Departments that she had worked in herself: 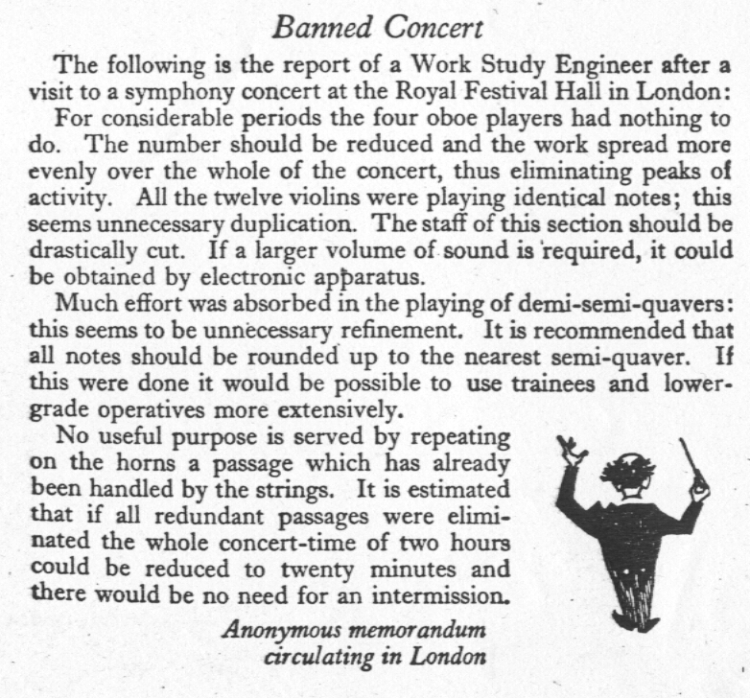 It is perhaps not surprising that the first story of hers that was accepted for publication by Argosy also had a musical inspiration; called Some Music for The Wicked Countess,  it has as its hero a serious young composer who finds himself in the wilds of Ireland earning his living as a music teacher in a village school, but who is utterly unaware that the surrounding forest is not only ‘stiff with enchantment’ but also contains a magical castle inhabited by a scheming Countess determined to lure him up to her bower for a musical soiree.

He fails to fall for a whole series of magical entrapments, and in the end the enraged Countess is forced to appear to him in person while he is out in the forest collecting moths. Slightly bewildered he follows her up ‘half-a-hundred stairs’ to her tower,while she sends a couple of leprechauns to fetch his piano, and having unwittingly avoided drinking another magic potion he sits down to perform:

The cover illustration above is from the Japanese translation of a collection of Joan Aiken stories.The story called A Rented Swan was also originally published in Argosy

The People in the Castle